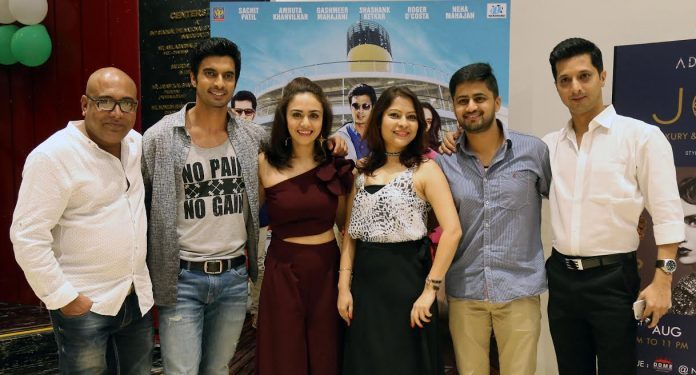 Cruising through three beautiful countries, with glamorous faces from the Marathi film industry, the movie “One Way Ticket’’, is ready for an entertaining journey. One Way Ticket is being released on September 23. Recently the trailer and the music of One Way Ticket was launched with a grand celebration. A “Video Palace” and “Mekbrand” presentation, the movie is produced by Komal Unawane and directed by Kamal Nathani and Amol Shetge.

The movie has a different layout and presentation. The music of the movie too, will definitely enrapture the youth with its freshness. The lyrics, penned by Ashvini Shende and Mandar Cholkar, have been set to music by Gaurav Dagaonkar. The background score is by Troy Aarif. There are five songs in the film. A romantic number “Befikar” Is sung by Rohit Raut and Shrinidhi Ghatate, a second one “Reshmi Reshmi” by Anandi Joshi and Gaurav Dagaonkar. Vocals for the other songs are by Savaniee Ravindra, Kshitij Wagh, Orunima Bhattacharya and Shifa Harris. The team believes that with a riveting storyline, along with breathtaking locations and melodious songs, One Way Ticket is bound to capture the cine-goers’ minds.  The producer, young Komal Unawane, has tried to entwine varied things to create a quality film. The co-producers of this film are “Click Flicks Films” and Suresh Pai.

One Way Ticket, a suspense thriller is based on the story of five people on a grand cruise. Unexpected events, which  unfold during the journey, will keep the audience rooted to their seats, it is going to be a visual treat. Glamorous faces from Marathi film industry, Sachit Patil, Amruta Khanvilkar, Gashmir Mahajani, Shashank Ketkar,and Neha Mahajan have come together for the first time for this film. Asha Shelar and Roger D’Costa are also present in the film.

The story, script and dialogues are written by Amol Shetge, the assistant director is Mahesh Pawaskar. Director of Photography is Rupang Acharya, while the Art directior is Swapnil Takle. Editing is by Aashish Mhatre and Apurva Sahai. The Choreographers are Rajiv and Sujit Kumar. The launching of the trailer and music of One Way Ticket was sponsored by “Hindustan Unilever” and “Pond’s Dreamflower”

Releasing on September 23, One Way Ticket is going to be a complete entertainment package for the movie-goers.