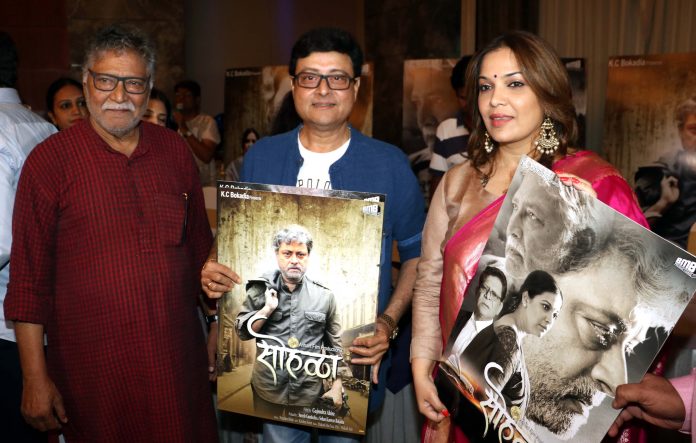 Presentor K C. Bokadiya and Producer Sohan Bokadiya with Director Gajendra Ahire, under the banner of Suresh Gunde’s Arihant Film Production house, the poster and trailer of film “Sohala” was recently launched in hotel Sea Princess situated in Juhu by Zee Etc channel’s
Komal Nahata. On this occasion the whole team of Sohala was present.

While talking to press, Presentor K C. Bokadiya said, “This is my first Marathi film and I have presented a film which has a very sensitive topic and I am sure that audience will love the film and its content for sure.” National award winner Gajendra Ahire is the Director of the film. Most importantly Evergreen Star Sachin Pilgaonkar and Shilpa Tulsikar are the leads in the film. With them the star cast includes Vikram Gokhale, Mohan Joshi, Lokesh Gupte, Bharat Ganeshpure and Astha Khamkar with other members whose role has an important impact on the film.

The story of the film resembles to this generation’s small and divided families. The film showcases the changes in the relationships and the different challenges faced in joint families to the stretched relationship between the small families of this generation.

Actor Sachin Pilgaonkar said, “The name of the film itself reveals the story of the film. This is the different shades of the relations in different generations, from olden day’s joint families to this generation’s practical small families, each one having their own set
of challenges. This movie is for all the generations and everyone can easily get connected to this film as there is some or other place in this Sohala.” Fulva Khamkar has handled the Choreography in the film, with Music by Dilay Narendra Bhede. With this film Bollywood’s senior director and presenter K. C. Bokadiya is making their debut in Marathi film industry.