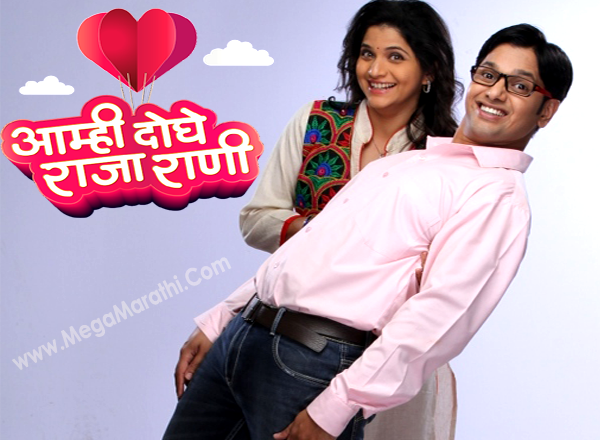 An upcoming serial of Star Pravah with well known starcasts like Deepti Lele. Promo shows that, serial is based on a naughty relationship between husband and wife and boding between daughter in law and entire family.

When two polar opposites come together, there’s bound to be friction. Moreover, a love-story between two opposite personalities is pretty interesting. Star Pravah’s new serial ‘Amhi Doghe Raja Rani’ brings forth a similar and sweet love story.
The protagonists Parth and Madhura live with their families. They love their families but their family members are colourful characters. These characters add tadka to Parth and Madhura’s love story. How and what they do to Parth and Madhura’s love story has been presented beautifully in this serial. This is a serial that can be watched with the complete family. It shows how the protagonists’ hatke first meeting turns into friendship and more.
Sangita Rakesh Sarang’s Camsclub has produced this new serial which has been written by Vijay Patwardhan, Sameer Chaughule and Abhijit Pendharkar. Sanchit Vartak is directing the serial which features Mandar Kulkarni and Dipti Lele. The supporting cast includes established actors like Milind Phatak, Vinay Yedekar, Maithili Warang, Sulekha Talwalkar and Shital Shukla.

Deepti Lele is doing a lead role of Daughter in law. She is well known for her role in ‘Lagori Matri Returns’ Marathi television serial broadcast on Star Pravah channel. Also she have acted for ‘Majhiya Mahera’ aired on Colors Marathi where she was playing a role of Suman opposite actor Vikas Patil.