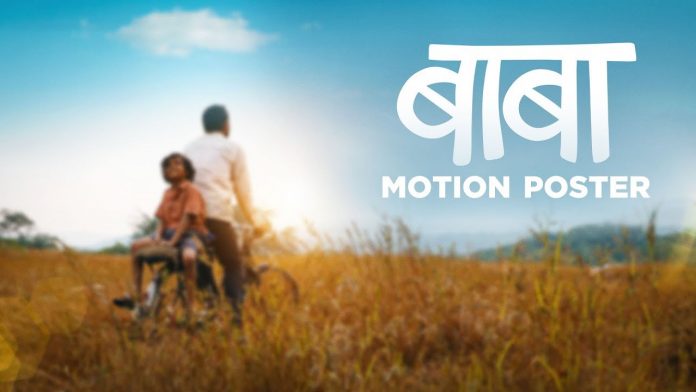 The star who has given many hits in Hindi films and is popular with many Sanjay Dutt  is now venturing into Marathi cinema with wife Maanyataa Dutt. Their first production is titled ‘Baba’. Under the banner of Sanjay S Productions  along with co-producers Ashok Subedar and Aarti Subedar of Blue Mustang Productions. Blue Mustang Productions had earlier made ‘Bucket List’ with Madhuri Dixit which was Madhuri’s first film.

The first poster of the film ‘Baba’ was recently released by the makers and the film is scheduled to release on August 2 2019.

An alumni of National School of Drama and who made a mark in Tanu Weds Manu, Deepak Dobriyal plays the lead role in the film. It is his first Marathi film. Also starring is Nandita Dhuri Patkar. Also a part of the cast are Spruha Joshi, Abhijeet Khandkekar, Chittranjan Giri, Jaywant Wadkar and child actor Aryan Meghji. The film is directed by Raj R Gupta who was an assistant director during the making of ‘Bucket List’. He has made a short film titled ‘Dhagaa’ for ZEE 5.

Sanjay Dutt tweeted and took the blessings of his father ,the great Sunil Dutt and dedicated the film to his fathers memory.He says, “ Our father and his memories have stood by us entirely during the making of this film. Love you Daddy”. Manyatta Dutt says, “ We are dedicating our first Marathi film ‘Baba’ to Sunil Dutt jee whose memories were like a Rock of Gibraltar to us and gave us a lot of confidence in making this film which almost doubled”. Ashok Subedar of Blue Mustang Productions says, “  Baba is a story written by Manish Singh and revolves around a father and a son set in a picturesque Konkan village and this story will touch the audiences of all ages because the scenario has a lot of sensibility and is a very simple tale”.

Baba’s Director Raj R Gupta says, ‘;  There is no language for emotions and this has been expressed powerfully by all the actors in our film and it’s a story about a family which stays together facing against all odds and this tale has a lot of sweet and bitter sequences”.