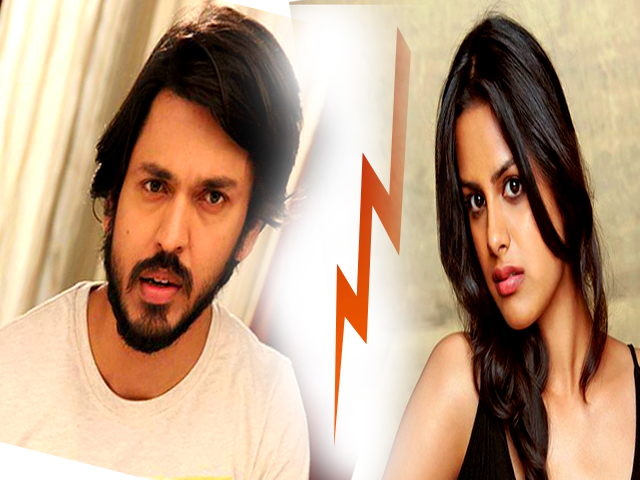 Social media is the best platform for the celebrities to reach out maximum people in the least possible time. They use it to make important announcements about new projects and keep their fans updated, and sometimes if we’re lucky, brawl with other celebs.

Recently the Whatsapp conversation between Mahesh Bhupati and Paes was put out in the social media. Then fight moved from press conferences to Facebook and Twitter. Now M-town too has celebrity Cold war over Social Media.

Actress Neha Mahajan and Lalit Prabhakar are seeing having a feud on twitter. Day before yesterday Neha had put up a picture of a beautiful place on twitter and had wished to go there. On that tweet Lalit mocked her by saying that, “People just wish to travel places. Don’t just wish, take out time and travel.” Neha came to know that Lalit is mocking her and she tweeted back saying that she is busy and doesn’t have time to travel. On that Lalit replied back that what’s the use of all the money that you earn if you can’t fulfill your wishes.

Though Neha didn’t reply to this tweet by Lalit but on the next day Neha seem to have scornedLalit on his tweet “Super Duper excited for tonight’s match. Go MI… आज तरी नीट खेळ रे @RohitSharma.. Looking forward to your performance. Fingers.” Neha teased Lalit by tweeting, “It’s so annoying when actors think they are better cricketers and advice players on their game!” The fight didn’t end here. Lalit back answered Neha by saying that Girls who watch cricket matches just to watch cricketers shouldn’t comment on this game and by this tweet Neha certainly got pissed and she replied back by tweeting, “People who watch tennis just for the hot miniskirts are sure to think others watch cricket for similar reasons”. The reason behind this twitter cold war between the two is yet to be revealed, but for now their fans must be enjoying this fight.