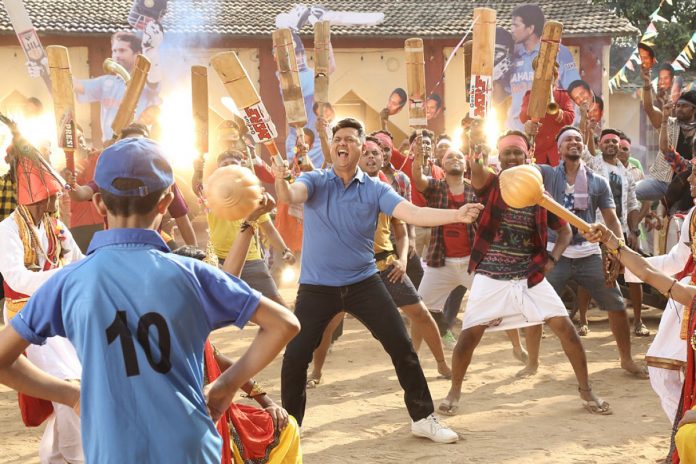 ‘Mee Pan Sachin’ is the new film starring Swwapnil Joshi which will release soon. It’s the story of an ambitious boy. Recently the promotional song for the film was shot. The lyrics of the song ‘Aila Ailaa  Sachin’ was recently shot in a zingy manner and it will be a great treat for Sachin Tendulkar fans. The song features Swwapnil Joshi and Priyadarshan Jadhav in a market of a small village. If one visualizes village market we get to see the vegetable vendors, band players, vasudeva, and little children. Other than this there is also a huge poster of the Master Blaster Sachin Tendulkar which features in this song. In accompaniment of cymbals, drums, and little flags and in such an ambiance the song is shot in a grand manner.

The producer Shreyas Jadhav says, “ We are going to play a tribute to the Master Blaster and therefore there was a lot of energy on the sets while picturizing this song and we had a lot of fun while doing this song”. Swapnil Joshi says, “ The film is not only about cricket but also a slice of life film because there are a lot of similarities between cricket and life because we can’t anticipate what is going to happen next in cricket as well as life”.

The film produced by Eros International   and Everest Entertainment and Ganraj Associates will release on 1st February. Neeta Jadhav, Sanjay Chhabria., Nikhil Futle and Ganesh Gite are the producers of the film along with Shreyas Jadhav who is also the writer and director of the film.  Shreyas Jadhav has also handled various subjects finely in many directorial ventures. Therefore we can be assured that we will get to see something new and interesting in this film. The film will be released overseas too by Eros International.