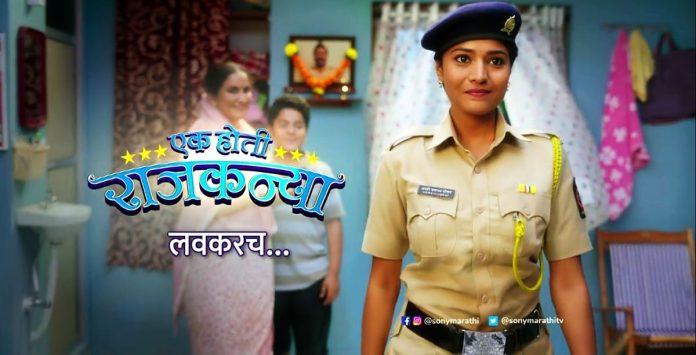 If you recall a princess , you are reminded of the fairy tale and the fairy in the tale and now in the latest SONY Marathi show ‘Ek Hoti Rajkanya’  which was evident from their promos that the princess in their show is a simple and middle class girl from a family just like ours and how her life will be envisaged and her father reciting poems for her and for him his darling daughter is just like a princess. But for the apple of the eye of her father, the princess has to deal with many hurdles in her life. She dreams of doing social service and to wear a doctors uniform but the uniform that she gets is that of a policewoman. The life of this policewoman will be revealed from 11 March and the press conference of this show was held in Mumbai recently.

On this occasion the princess of her father Avni played by Kiran Dhane, and the fathers role played by Kishor Kadam, were present. Speaking on the occasion Sony Marathi Business Head Ajay Bhalwankar and the producer Mahesh Kothare of Kothare Vision and Adinath Kothare and the lyric writer of the splendid title track of the show Ashwini Shende and the superb executioner of the title track of the show Ashok Patki were also present .

As an example of the woman of the 21 st century , Avani has lost her father at an early age, she has to undertake the responsibility of her house and family and she has to take good care of her younger brother and her mother and she doesn’t fail any of her responsibilities . When will this difficult journey of the fathers princess end and as her father’s poem says that when will she gets the bouquets and how she will be troubled by her detractors will be shown in the forthcoming episodes of the show.

The title song and the story of the show is the riveting point of the show and has been written by Ashwini Shende and the title song is sung by Devaki Pandit and Ajay Purkar. And composed by Ashok Patki and Ashok Patki and Devki Pandit are collaborating after a long time.  ‘Ek Hoti Rajkanya’ as said in the fathers poems and her meeting with the Prince Charming in her life  in the end which will be witnessed by you from 11 March Monday to Saturday at 7.30 pm on SONY MARATHI .